The US, Threatened or The Threat

How the US public regards potential threats and how the rest of the world sees them stand in stark contrast. How the US public thinks about international issues is dictated almost entirely by government pronouncements and a docile US media. That the public is willing to accept without question US foreign policy is a reflection of disinterest and education. The public only questions US misadventures after the fact, when they go wrong – Vietnam, Iraq, Afghanistan, Libya and, soon to be, Syria, to name a few.

To see how the US reacts to news one needs only to read poll results regarding what I call “The Threat du Jour” the perceived threat to “US National Interest”, another overused government buzzword.

The lineup changes, sometimes from year to year or month to month, even week to week, depending on what agenda the US is pushing at any given time. As you see in the excerpted Gallup Poll below the Number one “Enemy” has changed over the years to conform to how the US government advertises the Enemy, whether there is a disagreement with the country in question. It has nothing to do with an actual threat, the likelihood of an attack on the US. It is inconceivable that any of these countries would launch an attack on the US, knowing full well the US is capable of, and likely to obliterate them. Rhetoric by countries such as North Korea is one thing action is something else.It is interesting in the poll that two of the countries “liberated” by the US, Iraq and Afghanistan, are still considered the threats they were in 2001-2002 after being decalred a success. Syria, too, is a bit of a mystery. The US objects to Syria’s Assad government but has Syria threatened the US? What constitutes an enemy for the US, as I said, has nothing to do with threat but rather whether a country complies with and follows US policies and US principles, the principles being whatever promotes US dominance.

If the US were to announce Libya is the greatest threat because of the presence of ISIS, the polls would immediately reflect that. If one asks the US public why Russia is a threat to the US, the response would likely be linked to the Ukraine or Crimea without knowing anything of the history of Russia, the Ukraine or Crimea or the events surrounding the conflicts. No mention of the corrupt, bankrupt Kiev government or the right wing, Pravyi Sektor extremists in the Ukraine. The knee jerk reply will be based entirely on what one reads or hears in US media, a media that, in turn, regurgitates US State Department policy.

That is the view from America. Now let us have a look at how the US is seen from abroad. Herewith a poll conducted by the BBC 18 months ago and America’s perception of itself differs widely from that of other countries. The US, with its history of meddling in other countries affairs and propensity for settling differences by war rather than diplomacy understandably worries other countries. 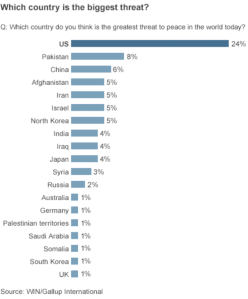 Edward Morgan best described US Diplomacy in his quote about England in 1920:

“The Germans are called brutal, the Spanish cruel, the Americans superficial, and so on; but we are perfide Albion, the island of hypocrites, the people who have built up an Empire with a Bible in one hand, a pistol in the other, and financial concessions in both pockets”

This site uses Akismet to reduce spam. Learn how your comment data is processed.